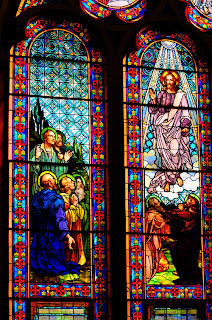 The hymns used in the Liturgy of the Hours on the Ascension of Our Lord reflect the themes of heaven and earth. In the following video Fr. Robert Barron from Word On Fire Ministries lends his own perspective on the Ascension. To best understand it, he explains that Christians need to recover a Jewish sense of heaven and earth. When Jesus prayed: "as it is on earth as it is in heaven", he was expressing the ancient Jewish concept of heaven and earth  as impinging on each other. Instead, many in modern times have, without realizing adopted Plato's view of earth, and indeed even our own body as a prison from which we long to be freed. The other world is 'up there' in a spiritual realm, and 'down here' we live in a world of matter; the two are distinct and unrelated. After the Ascension, the disciples stand looking up at the sky in a manner more fitting for a Platonist. But then, two men dressed in white garments (denizens of heaven) chastise them: "Men of Galilee, why are you standing there looking at the sky? This Jesus who has been taken up from you into heaven will return in the same way as you have seen him going into heaven.” Acts:1, 10-11. They are reminding the Apostles of their mission "to do all they can to bring about the Kingdom on earth, as it is in heaven."