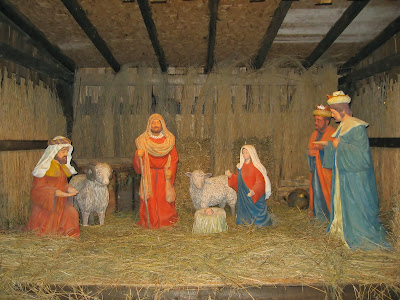 The Epiphany of Our Lord is an ancient feast with it's origins in the Eastern Church. Beginning at paragraph #528, the Catechism of the Catholic Church speaks of it this way: "Epiphany is the manifestation of Jesus as Messiah of Israel, Son of God and Savior of the world. The great feast of Epiphany celebrates the adoration of Jesus by the wise men (magi) from the East,... In the magi, representatives of the neighboring pagan religions, the Gospel sees the first-fruits of the nations, who welcome the good news of salvation through the Incarnation. The magi's coming to Jerusalem in order to pay homage to the king of the Jews shows that they seek in Israel, in the messianic light of the star of David, the one who will be king of the nations. Their coming means that pagans can discover Jesus and worship him as Son of God and Savior of the world only by turning towards the Jews and receiving from them the messianic promise as contained in the Old Testament."


Commentary by Fr. James Kubicki of the Apostleship of Prayer