Tantum Ergo / Down in Adoration Falling


Tantum Ergo was written by St. Thomas Aquinas. The words are taken from the final verses of the Vesper Hymn, Pange Lingua of the Office for Feast of Corpus Christi that Aquinas wrote in 1264 at the request of Pope Urban IV. Despite it's origins as part of the Divine Office, Tantum Ergo is more closely associated with it's prescribed use in the Benediction of the Blessed Sacrament. In the 19th century it was translated by Fr. Edward Caswall (1814-1878) as Down in Adoration Falling (2nd video) which is traditionally sung to a tune from Cantus Diversi by John Francis Wade (1711-1786). In recent years a longer version of this translation was given a contemporary arrangement by the popular Catholic recording artist: Matt Maher (see 3rd video).

DOWN IN ADORATION FALLING - Translation by Edward Caswall (Public Domain)

Down in adoration falling,
Lo! the sacred Host we hail,
Lo! o'er ancient forms departing
Newer rites of grace prevail;
Faith for all defects supplying,
Where the feeble senses fail.

To the everlasting Father,
And the Son Who reigns on high
With the Holy Ghost proceeding
Forth from each eternally,
Be salvation, honor, blessing,
Might and endless majesty. Amen. 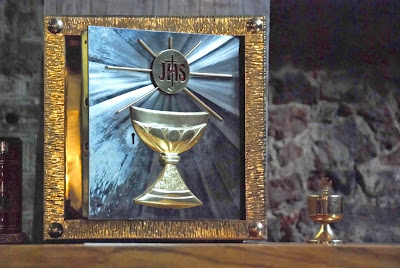 The hymns selected from the Liturgy of the Hours for use on the Feast of Corpus Christi, or the Feast of the Most Holy Body and Blood of Christ reflect the theme of 'sharing our life with Christ'. In the following video, Fr. James Gardiner of the Franciscan Monastery of the Holy Land located in Washington, D.C. shares some of his thoughts about Corpus Christi. He begins by noting it's similarity with Holy Thursday and the institution on that day of the Sacrament of the Eucharist. The Feast of Corpus Christi was established in 1264 by Pope Urban IV. In the same year he commissioned St. Thomas Aquinas to compose a special Office for Corpus Christi which included Pange Lingua Gloriosi, Tantum Ergo Sacramentum and Adoro Te Devote. Fr. Gardiner sums up by reminding us that "like the consecrated Bread and Wine, we are challenged to be, ourselves, a real presence of Christ in the world". 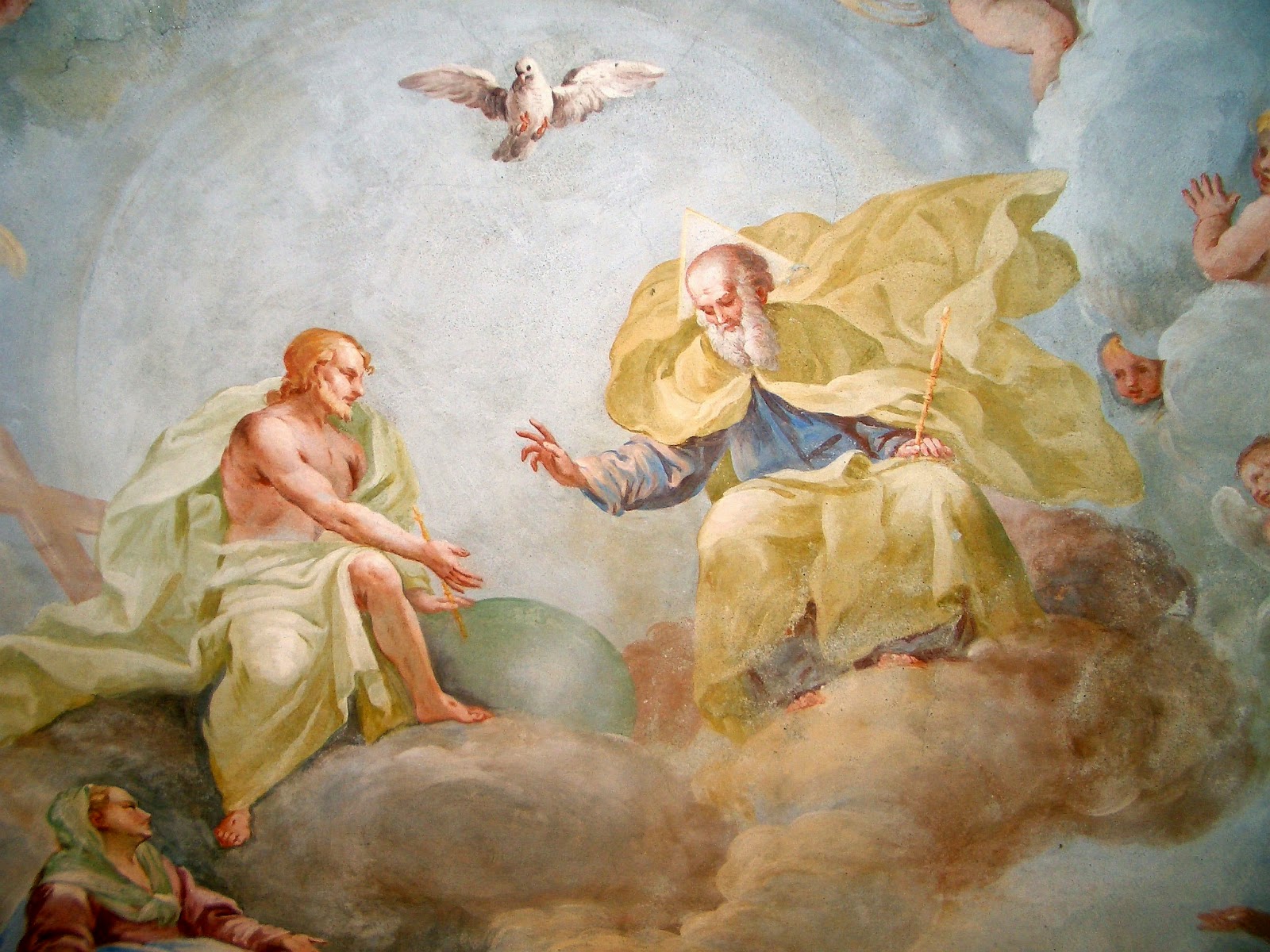 The hymns used in the Liturgy of the Hours for the Solemnity of the Most Holy Trinity reflect the theme of the ineffable mystery of God. John Paul II stated in a homily given at a Mexican Seminary in 1979, that "our God in his deepest mystery is not a solitude, but a family, since he has in himself fatherhood, sonship and the essence of the family, which is love." In his video series: Catholicism, Bishop Robert Barron picks up on John Paul's words of interpersonal love within the Godhead to describe the Trinity as the "Lover, the Beloved, and their shared love." He goes on by quoting from Book IX of De Trinitate in which St. Augustine presents the image of the Trinity as "Mind, Self Knowledge, and Self Love". And finally Bishop Barron suggests that even our own struggle to fully grasp and describe the Trinity points to the mystery, not unlike Benedict XVI's analogy of the incense we use at Mass as a symbol of the ineffable.

DIVINE OFFICE (1974)
Father Most Holy
Firmly I Believe and Truly
No comments: 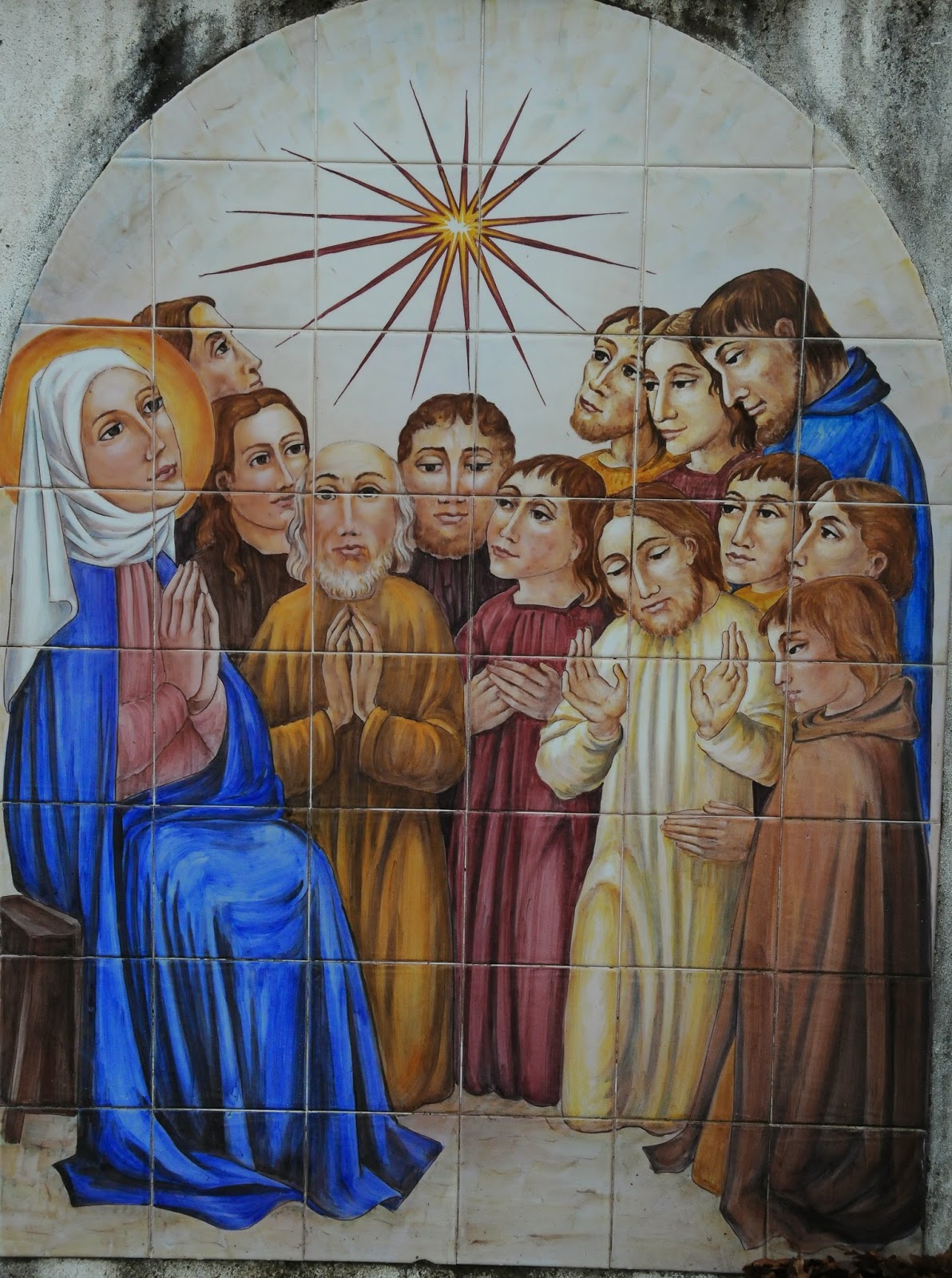 The hymns used at Pentecost in the Liturgy of the Hours celebrate the founding of the Church as Christ's Mystical Body, and the Father's sending of the Holy Spirit that will always remain with the Church, continually renewing, guiding, and pouring out his graces upon his people. In the following video, Fr. James Kubicki, SJ of the Apostleship of Prayer shares some of Pope Benedict XVI's refections on Pentecost from his Homily on Pentecost Sunday for 2009. Benedict reminds us that "Pentecost is distinguished from all the Solemnities by it's importance since what Jesus himself had announced as the purpose of the whole of his mission on Earth is brought about in it." What is his purpose? As he said in Luke 12: 49: "I came to cast fire upon the earth; and would that it were already kindled!"


Come, Ye Faithful, Raise the Strain is a translation of an 8th century Greek canon by St. John of Da­mas­cus (675-749). It was composed around the year 750, to be used for the first Sunday after Easter. It is based upon the 'Song of Moses' from Exodus 15. Such canons, or hymns in the Eastern Church depict Salvation History using Old Testament 'types' and prefigurements that are fulfilled and made real in the New Testament. In 1859 the text was translated into English by the Anglican minister, John M. Neale, (1818-1866) and set to the 1872 tune: St. Ke­vin by Sir. Ar­thur Sul­li­van (1842-1900). In the Divine Office, Come, Ye Faithful, Raise the Strain is used during Easter Season.

’Tis the spring of souls today; Christ has burst His prison,
And from three days’ sleep in death as a sun hath risen;
All the winter of our sins, long and dark, is flying
From His light, to Whom we give laud and praise undying.

Now the queen of seasons, bright with the day of splendor,
With the royal feast of feasts, comes its joy to render;
Comes to glad Jerusalem, who with true affection
Welcomes in unwearied strains Jesus’ resurrection.

Neither might the gates of death, nor the tomb’s dark portal,
Nor the watchers, nor the seal hold Thee as a mortal;
But today amidst the twelve Thou didst stand, bestowing
That Thy peace which evermore passeth human knowing.

“Alleluia!” now we cry to our King immortal,
Who, triumphant, burst the bars of the tomb’s dark portal;
“Alleluia!” with the Son, God the Father praising,
“Alleluia!” yet again to the Spirit raising.
No comments:

A Hymn to God the Father
A Mighty Wind Invades the World
A Noble Flow'r of Juda
Abide with Me
Abroad the Regal Banners Fly
Afar from Where the Sun
Alma Redemptoris Mater
All Creation was Renewed
All Creatures of Our God and King
Alleluia, Sing to Jesus
All People that on Earth
All Ye Who Seek a Comfort Sure
Alone with None but Thee
Angels of God, You See the Father's Face
Antiphon
Apostle of the Gentiles
At a Solemn Music
At the Lamb's High Feast
At the Round Earth's Imagined Corners
Ave, Regina Caelorum

Batter My Heart, Three-Personed God
Battle is O'er
Before We End Our Day
Bethlehem, of Noblest Cities
Be Thou My Vision
Bless'd be the Lord our God
Blest are the Pure in Heart
Bright as Fire in Darkness
Bring, All Ye Dear-Brought Nations, Bring, Alleluia

Day is Done
De Profundis (Out of My Soul's Depths)
Discipline

Father Most Holy
Father, We Praise You
Firmly I Believe and Truly
For All the Saints
For All Thy Saints, O Lord
Forth from on High

Gall He Drinks
God Called Great Prophets
God Hath Spoken by His Prophets
God, of Thy Pity, Unto Us Thy Children
God, Who Made the Earth
God's Blessed Spirit
God's Grandeur
Good Lord, Deliver Us!

Hail, Our Queen and Mother Blest
Hail Our Saviour's Glorious Body
Hail, Queen of Heaven, Beyond Compare
Hail, Queen of Heav'n, the Ocean Star
Hail to the Lord Who Comes
Hail, Redeemer, King Divine
Hear the Herald Voice
His Cross Stands Empty
His Litany to the Holy Spirit
Holy God, We Praise Thy Name
Holy Light on Earth's Horizon
How Great the Tale
Hymn to God My God, in My Sickness

I Am the Holy Vine
I Bind Unto Myself Today
Immortal, Invisible, God
In Ancient Times God Spoke
In No Strange Land (The Kingdom of God is Within You)
In the Beginning, God Created
It Were My Soul's Desire

Leader Now on Earth No Longer
Lead, Kindly Light
Let All on Earth Their Voices Raise
Lord God and Maker of All Things
Lord God, We Give You Thanks
Lord God, Your Light Which Dims the Stars
Lord Jesus, Think On Me
Love Bade Me Welcome
Love of the Father, Love of God the Son
Lord of all Hopefulness

Maiden, Yet a Mother
Man of Sorrows, Wrapt in Grief
Marina
Mary, Crowned with Living Light
Merciful Saviour, Hear Our Humble Prayer
More Ancient than the Primal World
Mother of Christ, Hear Thou Thy People's Cry
My God, I Love Thee
My Song is Love Unknown

Peace
Pied Beauty
Praise, My Soul, the King of Heaven
Praise to the Holiest
Praise We the Woman
Proclaim His Triumph

Salve Regina
Sing All Creation, Sing
Sing My Tongue of Warfare Ended
Songs of Thankfulness and Praise
Sower and Seed of Man's Reprieving
Spirit of God, On the Waste
Star of Sea and Ocean
Sweet Saviour, Bless Us

Te Deum
That Nature is a Heraclitean Fire and of the Comfort of the Resurrection
The Ark Which God Has Sanctified
The Call (Come, My Way)
The Co-Eternal Son
The Church's One Foundation
The Day is Filled with Splendour
The Day Thou Gavest, Lord
The Dial
The Father's Glory, Christ
The Father's Holy Ones
The Flower
The Killing
The Lord Goes Up with Shouts of Joy
The Love of God was Shown to Man
The Martyrs Living Now With Christ
The Morning-Watch
The Nativity of Christ
The Saints Who Toiled
The Windhover
The World
They Come, God's Messengers
This Day at Thy Creating Word
This is the Day Whereon the Lord's True Witness
To Christ the Lord of Worlds We Sing
To Christ, the Prince of Peace
To Keep a True Lent
Transcendent God
Trinity Sunday
True Love (My True-Love Hath My Heart)

Unto Us a Child is Given

We Bless You, Father
We Praise You, Father
What Fairer Light
When Christ Our Lord to Andrew Cried
When God had Filled the Earth
When God Made Man he Gave Him
When Jesus Comes to be Baptized
When Time Began, God Walked with Man
Where True Love is Dwelling
Who are these Like Stars Appearing?
Who is She Ascends So High?
Wilt Thou Forgive That Sin, Where I Begun
No comments:


Alphabetical index of all Latin Hymns on this website. Many of them were traditionally used in the Roman Breviary. Prior to the reforms introduced by Paul VI in 1974, the Breviarium Romanum (1962) was the approved version of the Office used throughout the Church. It was prayed or sung in Latin and was itself the result of numerous revisions throughout the centuries. A number of the hymns selected for the Liturgy of the Hours (Divine Office) are English translations from the original Latin, and thus represent a degree of continuity with the Roman Breviary. Where possible I have presented both the the original Latin text and audio/video performance along with it's English translation.